Fr. Joseph Matlak was born on March 2, 1985, in Dunstable, Bedfordshire, England. His father was born in Poland, and his mother hails from the Portuguese Island of Madeira. He has one younger sister, Natalie. In 2003, he graduated from Nicholas Breakspear R.C. Secondary School in Saint Albans, Hertfordshire. After spending a "gap year" teaching English in Normandy, France, he graduated from King's College London with a B.A. in Ancient History, specializing in Byzantine history and theology. In 2007, he entered St. Josaphat Seminary in Washington D.C., studying Philosophy and Theology at The Catholic University of America. In 2012, he graduated with a Master of Divinity (M.Div.) and Bachelor of Sacred Theology (S.T.B.). After a pastoral year serving in various parishes in Ohio, Pennsylvania, North Carolina, and Florida, he returned to obtain a Licentiate in Sacred Theology (S.T.L.). He was ordained by Bishop Bohdan Danylo to the diaconate on June 7, 2015, at St. John the Baptist in Pittsburgh, Pennsylvania, and to the priesthood on October 1, 2015, at St. Josaphat Cathedral in Parma, Ohio, which was also his first assignment. On September 1, 2016, he was named administrator of St. Basil the Great in Charlotte,  and, on March 18, 2018, of the newly established Holy Cross Mission in Columbia, South Carolina. He also serves as Chaplain of Charlotte Catholic High School and Holy Trinity Catholic Middle School in Charlotte. He is married to Katie Ann (Patton), a graduate of Franciscan University of Steubenville and theology teacher at Charlotte Catholic High School. Among other things, he enjoys traveling, film and theater, music, and history. 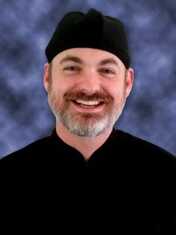